After all my travel, money was getting tight and I was fortunate to fall into employment almost immediately. Right place, right time. I became a waiter at a seafood restaurant called The Jetty. It was a popular eatery in the city, partly because of its great value buffet and partly because of its location. The alfresco dining area was a deck that sat over the water with views of Darwin harbour and out to the Timor Sea. On a typical warm evening, it made the ideal place to enjoy a meal while watching storm clouds building and lightening flashing on the horizon. 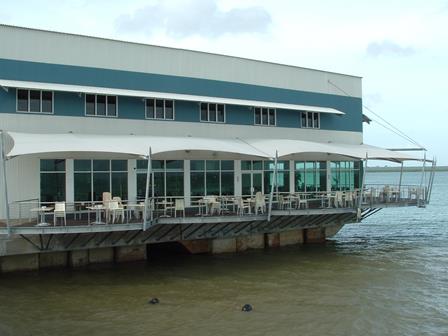 Ideal for the restaurant patrons anyway. For us, it was usually bloody hard work especially if it was a Friday or Saturday night. Diners helped themselves to food from the buffet while we were flat out bringing them drinks and clearing tables. All I could think in those busiest moments was that at least I wasn’t slaving away in the kitchen washing dishes! In some small way, at I’d managed to move up in the world and I have to say that the meal we were given each night was better than Gilligan’s!

So with evening employment organised, I still had plenty of time during the day to explore the city and its surrounds. The central point of Darwin is the pedestrian Smith St Mall from where it’s a relatively short walk to the waterfront precinct. Aside from coming down here late afternoon each day for work, it was also I good place for fishing and catching sea breezes. A good walk that I always enjoyed was the path through Bicentennial Park that follows the foreshore to a point called Doctors Gully. 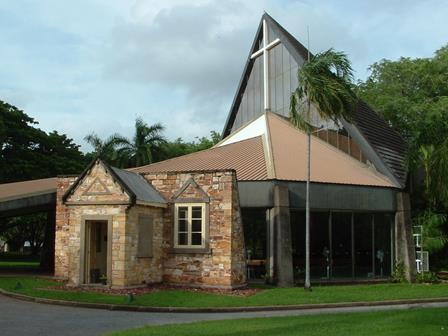 A highlight of Darwin is the Northern Territory Museum and Art Gallery. These galleries include a superbly presented collection of aboriginal art, including paintings from nearby Arnhem Land and carvings from the Tiwi Islands. Cyclone Tracy ripped through the city in 1974 and an entire room is devoted to graphically illustrating the devastation of that day. On my visit I got a photo of Sweetheart: a 5 metre long, 780kg salt water crocodile that attacked fishing dinghies on the Finniss River.

My home away from home was a wonderful hostel called the Wilderness Lodge. I loved my time there because the staff quickly became my friends and it wasn’t long before I joined them. My job in the morning was to clean the place in return for my weekly accommodation. There were a few others who were using it as their home while working in Darwin so we were given a room of our own. It always seemed to be in a shambles but it was always somewhere to relax and have a few laughs. 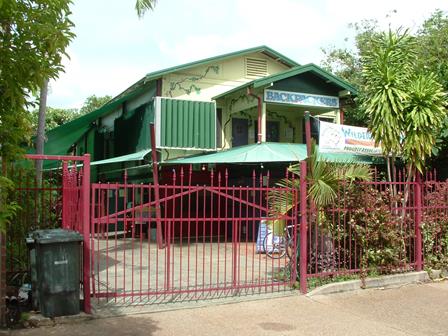 A perk of working at the hostel was that I could borrow a bike whenever I needed it. Darwin is great for cycling and a series of bike tracks covers much of the city. Several times I did a sunset ride out to East Point Reserve spit to watch wallabies emerging to feed and the sun sinking into Fannie Bay. This ride goes past Mindil Beach which has an excellent night market during the dry season. Aside from the stalls selling all kinds of food, art, craft and clothing, I loved the rhythmic sounds of bands combining the traditional didgeridoo with contemporary music.

Also on the way to East Point is the old Fannie Bay Gaol. Like Melbourne’s old gaol, it is a grim but interesting insight into nearly 100 years of penal history. I took time to visit one weekend and learned about the prisoners that were held and the crimes they had committed to be there. Also on view are the gallows where two of them were hung in 1952. Later in the day I continued in a slightly different direction to an area called Nightcliff and Casuarina Beach. While Darwin is no beach paradise, the attraction of this particular stretch of sand is that it’s an official nude beach. 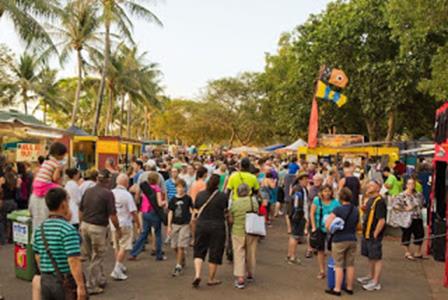 One day between my two jobs I took a bike 5km out to the Charles Darwin National Park. This park offers a network of paths that explore wetlands, woodlands and some WWII bunkers. (There are some other intriguing reminders of WWII in Darwin including oil storage tunnels, gun emplacements and the military museum that commemorates Australia’s only wartime attack.) From the park lookout there is a sweeping view over the mangroves and across Frances Bay to the skyline of the city.