I did plan to stay at the small town of Chidambaram on my travels but when I arrived I found the streets to be congested with all manner of vehicles. I was immediately confronted with a constant soundtrack of engines and horns together with the smell of petrol fumes. I changed my plan. I decided that I could visit the Nataraja Temple (which is the only reason to be there anyway) and push through to Thanjavur that afternoon. I was fortunate with the timing because I arrived at 12pm and it closes between 1pm and 4pm. This is common for many temples because of the afternoon heat. 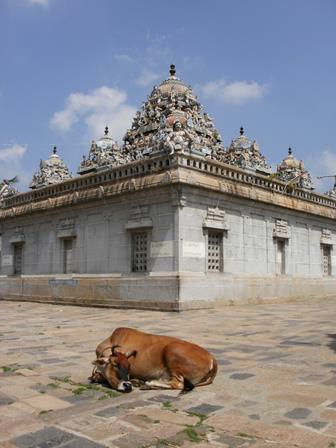 The Nataraja Temple is acknowledged as being one of the greatest in southern India. It is constructed in Dravidian style with four towering gopurams marking the entrances to what is a huge 22 hectare complex. There is a large tank and an inner sanctum which is off limits if you aren’t Hindu. This is the case in a number of temples that I’ve visited and I think it’s a curious thing. How do they know I’m not? How can a man’s beliefs be proved either way? What proof do they have of being Hindu other than the way they look? Basically, what they are saying is no tourists are permitted entry and it is policed strongly. 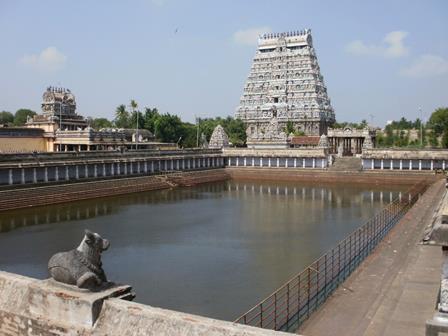 There are basically two reasons to visit Thanjavur; the Royal Palace and the Brihadishwara Temple. The palace was a disappointment but the World Heritage listed temple was quite simply amazing. The palace was a decaying reminder of a glorious era now well past. The central courtyard is overgrown with weeds and the inner corridors stink of pat poo. There is a gallery containing a collection of stone carvings and bronze images from the Chola period but the whole place was rather uninspiring. The highlight was a small museum that contained priceless old books, manuscripts and prints.

The temple on the other hand was probably the most impressive I’ve visited in all south India. Whether you visit in the morning when the sandstone begins to assert itself against the white dawn sun or late afternoon when everything is illuminated in beautiful golden colours, it is an absolutely wonderful place. As I was there for the whole day I visited twice and was fortunate to watch a Hindu ceremony there in the afternoon. This involved ‘washing’ the large statue of Nandi the bull with different coloured liquids and chanting between rinses. 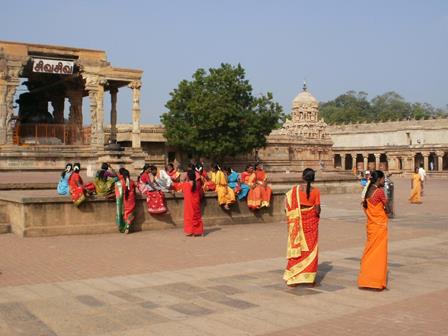 Taking about ten years to construct, it was commissioned in the year 1010 by king Rajarara, whose name literally means ‘king of kings’. He was a remarkably organised and even meticulous monarch who had the names and addresses of all his dancers, poets, musicians, watchmen, barbers, gardeners, cooks etc inscribed into the temple walls and columns. In addition, he also kept accurate records of how many gold and silver items his empire possessed. Now, that’s better than what many modern Indian institutions can manage! 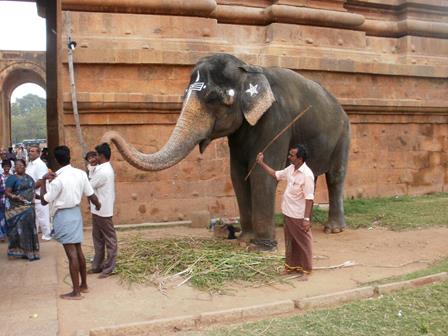 Elephant blessings outside the temple

Something I loved about this temple was the elephant standing at the front gate. It had been trained to touch the heads of people with the end of its trunk for good luck. I watched for nearly half an hour as people paid their rupees and received their blessing. Seeing their reactions was just as much fun as watching the elephant itself!